How to Render Jupyter Notebooks in Your Web (React) App

Jupyter notebooks are great for experimentation, teaching and learning. One way to make them even more powerful/impactful (especially for teaching) is to make your notebook available as a web page that can be viewed without the need for a specific python (or other language) environment (e.g., Colab, Kaggle, or Binder).

Why you should be using Jupyter Notebooks
Jupyter is a way of working with Python inside a virtual “notebook” and is growing in popularity with data scientists in large part due to its flexibility. It gives you a way to combine code, images, plots, comments, etc., in alignment with the step of the “data science process.” Further, it is a form of interactive computing, an environment in which users execute code, see what happens, modify, and repeat in a kind of iterative conversation between the data scientist and data.

I have written a few pedagogical notebooks and I wanted to explore ways to organize/integrate them into a web application (Gatsby) where they can be browsed easily and then launched if needed. My key requirements for this project included:

This post discusses my process in addressing these requirements and covers the following: 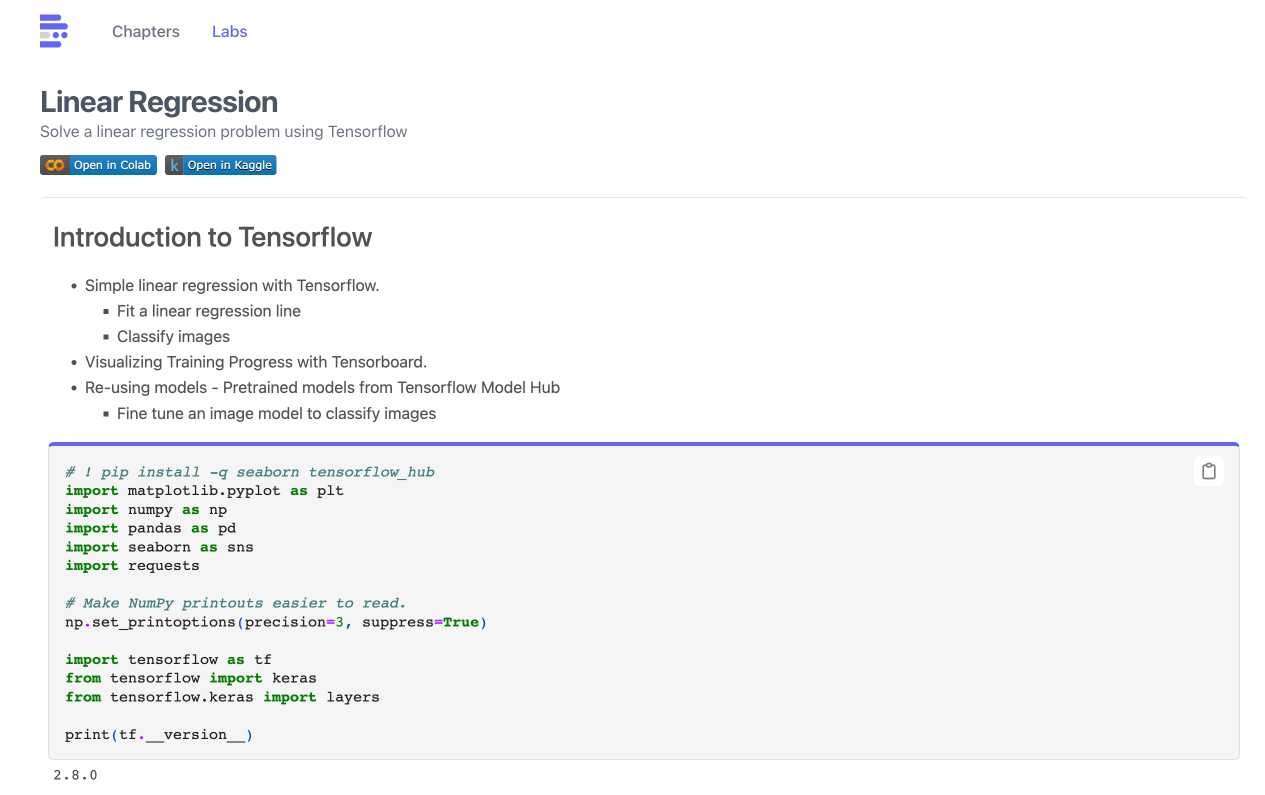 Example Jupyter notebook rendered on the web. P.S. Hinting at an experiment page for organizing some notebooks I have written on the web.

Note: The idea of Jupyter notebooks on the web is not new. If you are not particular about controlling the details of the notebook, the fastpages3 package from the incredible folks at fast.ai lets you create an entire blog completely from Jupyter notebooks. Also see Mkdocs1, a library for generating documentation sites from markdown files and jupyter notebooks2. Or Quarto4.

Fastpages
An easy to use blogging platform with extra features for Jupyter Notebooks. Fastpages automates the process of creating blog posts via GitHub Actions, so you don’t have to fuss with conversion scripts.

What's in a Jupyter Notebook?

If you have opened a Jupyter notebook file (.ipynb file extension) in a text editor, what you see is a json document. This json content (which we will refer to as jupyter json) is rendered in cells and made interactive in the jupyter notebook interface. The example below is the json for a jupyter notebook with a single code cell: print('Hello World').

Now that we know what's in an .ipynb file, the question is - how do we go from json to beautiful cells of text, formatted code and images that display nicely in the browser? There are two high level approaches - i.) directly parsing/rendering jupyter json and ii.) using nbconvert to convert jupyter json to other formats such as html, restructured text, markdown, latex, pdf etc.

Parse and Render Your Own Jupyter JSON

In theory, you can load a notebook file, parse the content as json and write your own React component to render its content (see pseudocode snippet below).

While this approach offers the most control, it is also the most effortful as you will need to fully understand the Jupyter json structure and also implement layout/styling (e.g., how to style code cells, output cells, parse & render markdown cells, code syntax highlighting, table formatting where applicable etc.). It is a lot of work! And perhaps unnecessary work.

See this open source project which attempts to implement a React component that loads a Jupyter notebook via url, parses and renders its content.

It turns out that you can leverage layout/design decisions made by others who have spent time designing and developing Jupyter Notebooks. Hello nbconvert!

bash
nbconvert is a Python package that converts Jupyter Notebooks to multiple target formats includingHTML, Markdown, LaTeX and ReStructuredText . Nbconvert provides default templates that govern the visual layout and style for each of these target formats. Results from nbconvert (which are already styled) are easier to include in your web application.
bash

I initially explored the markdown format as my Gatsby application already had a blog section based on remarkdown (a format that that allows writing JSX inside markdown files). However, I found that the markdown format generated by nbconvert were not immediately compatible with Gatsby causing parse errors. In addition, it can be challenging to visually style markdown and add interactive click behaviors. In theory, you can write a custom template to govern the generation of markdown files using the nbconvert templating system; however, again this route felt like unnecessary work.

I ended up using the following html approach:

Given that I have some experience with css and html, I found it easier to focus my effort on writing css rules to style/control the notebook.

Under the hood, nbconvert uses Jinja templates (.j2 file extensions) to determine how to render a notebook. If you need some custom preprocessing or a specific output format for your notebook, creating a new template file (which can inherit from any of the supported base templates) is the way to go.

To create a custom template, you will need to do the following:

Some of the css changes I made were to hide numbering in cells, add custom borders to code cells (.jp-InputArea-editor class), increase font-size, add copy code button to code cell (see section below) etc.

Once you are done styling, you can then run nbconvert using your custom template.

Once your notebooks are converted to html, you can create at React component that takes a url and renders an iframe with the html.

Note: There may be some limitations to the content of interactive notebook cells e.g., some python widgets such as visualization widgets may not render properly.

You can modify the base jinja templates to add new html content and enable interaction behaviors with javascript. For example, I want to create a button that allows users to copy the contents of a code cell to the clipboard.

To do this, you can add a button to the base.html.j2 jinja template in the dml directory. The snippet below adds a button all code cells.

Navigator.clipboard API
The Clipboard API can be used to implement cut, copy, and paste features within a web application. Use of the asynchronous clipboard read and write methods requires that the user grant the web site or app permission to access the clipboard.
html
index.html.j2

I added the following snippet to my gastsby-node.js file. Note that code in gastsby-node.js is executed once in the process of building your site. Alternatively, you can write a similar script in your language of choice that achieves the same goal.

Based on my experience building out the approach above, here are some general recommendations for rendering notebooks on the web.

This post discussed several approaches to parsing and rendering Jupyter notebooks. I hope that this post has helped you to understand the Jupyter Notebook format, how to convert it other formats using nbconvert and how to style and integrate it into your web application.

Have you worked on something similar? Or trying out some other approach? Reach out on twitter!

And yes, I look forward to sharing the "organized" collection of notebooks once I have made some more progress.

Interested in more articles like this? Subscribe to get a monthly roundup of new posts and other interesting ideas at the intersection of Applied AI and HCI.
Please provide a valid email address.
Thanks for subscribing!.
← Previous
Next →
web, visualization, how to

RELATED POSTS | web, visualization, how to

Please provide a valid email address.
Thanks for subscribing!.

Subscribe to get a monthly newsletter on Applied AI and HCI .